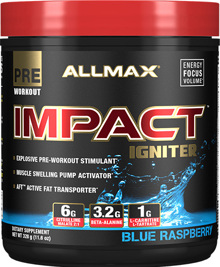 Go to Store
Quick Links to Deal PricesHow does this work and how do stores get listed? See our disclosure below to learn more.
Select Variation(s):
Size
Deal Price
20 Servings
$34.95
Go to Store
Go to Store
Compare store prices
See all AllMax Nutrition Products on PricePlow
Ingredients

The new ultra-premium standard by which all other pre-workouts will be judged. IMPACT Igniter is a fully dosed and highly effective Pre-Workout that’ll give you exactly what you want – results! Even better, these are results that improve the more you use it! Loaded with research directed dosages that work synergistically to produce superior results.*

With ongoing use in high-intensity training, IMPACT Igniter delivers:

IMPACT Igniter drives extreme motivation through a powerful blend of intense stimulants and advanced focus through cognitive enhancement agents. The intense motivation gets you into the gym and the extreme focus keeps you there.

SO HOW DOES IMPACT GIVE YOU BETTER WORKOUTS AND BETTER RESULTS?

The IMPACT Igniter formula contains ingredients that have been included in dozens of studies from around the world and have shown impressive results. But these results just scratch the surface of what you’ll experience when you try the high dosages of these ingredients in IMPACT.*

Why do you take a pre-workout formula in the first place? If you’re doing it right, it’s part of a ritual that primes you mentally and physically to perform at the highest level. To achieve superior results, you need to push yourself past your known limits. IMPACT has been designed and tested to deliver just this.*

Studies on Citrulline Malate, N-Acetyl-L-Cysteine, L-Carnitine L-Tartrate and Beta Alanine have independently shown an impressive array of key attributes that lead to performance increases within a four to six week period. Using these ingredients in IMPACT Igniter at the levels we have make us very confident that the rule of “extreme workouts and superior results” are based in fact.*

After over a year and nearly daily testing in the field with over 35 formulation revisions, we can tell you (very confidently) that these clinical lab setting research results are absolutely true. Dedicate yourself to the kind of intense training that challenges you and use these ingredients (whether you buy them separately, or use them in IMPACT) regularly and you’ll get results.*

A full 20% increase in the rate of phosphocreatine recovery after exercise (a strong marker of recovery) has been shown by clinical research with the ingredients in IMPACT at the levels included. Even more impressive, there was a decreased level of reported soreness by as much as 40% after resistance training.*

Top bodybuilders like Arnold Schwarzenegger have claimed that the only reps that matter are the ones past the point of pain. Scientific research has since pointed to this being absolutely true. Muscle adaptation takes place in response to pushing your muscles to and past failure.

This means that when you combine intense training and the mental will to push past your limits you now have a “perfect storm” that lets you adapt (or grow) more rapidly and recover faster. Let’s look at the results; over a 4 to 6 week time frame, users showed an increased number of reps of over 50% during resistance training – that’s a massive difference. Another published study, conducted at 80% of maximum output, showed that muscle lactate buildup was over 40% lower. These are the kind of increase that, when put to good use, can deliver extreme workouts and superior results.

THE FAT AS FUEL SHIFT

Anyone who is training to improve the look of their physique, more than anything, wants two things; increased muscle and decreased fat. They want the kind of lean look that comes from hard training and clean eating. But what research has shown is that there may be a way to help to tip the balance of how your body accesses fuel in your favor.*

Carnitine, Caffeine, Alpha-GPC and the group of stimulants Synephrine, Higenamine and Hordenine all produce some impressive effects that lead to a shift in the way that the body breaks fat down, releases it into the blood stream and uses it (burns it) as energy to power your training. Test subjects using IMPACT Igniter all reported an increase in body heat and sweating during training. This matches up with what the research says on key ingredients in IMPACT Igniter. Study participants used more than 50% less muscle glycogen (stored muscle energy) than the control group indicating that they burned more fat for fuel and had improved energy production.*

Impressively, the measured work output increased by more than 30%, while having a lower rate of perceived exertion; this is a powerful combination that allows you to maximize your training to accelerate your results. Even better, at the maximum exercise intensity, results showed a significantly increased level of both maximal oxygen uptake (a key measure of performance), and power output. IMPACT Igniter increases both the release of stored fat and the burning of that fat for fuel. It literally spares muscle energy and shifts metabolism to burn fat during intense training.*

We have known for decades that hitting the gym and lifting weights with repeated sets and high volume gives you the “pump”. But what is the pump and how does it help you (beyond inflating your ego)? The action of repeated muscle contractions with resistance over a long duration produce this effect through increased blood pooling in the muscle and increased metabolic waste from hard working muscles.*

So, how do we amplify this effect in the gym and take advantage of these effects without going blue. IMPACT Igniter has included high levels of key ingredients that have been shown to produce results that lead to substantial increases in levels of blood plasma, nitric oxide, erythropoietin (EPO) and osmolytes (ingredients that help manage hydro-pressure within muscles).*

A combination of Citrulline Malate (2:1), Agmatine Sulfate, N-Acetyl-L-Cysteine (NAC) and Taurine have been included at high levels to take full advantage of their ability to increase the body’s physiological tendency to flood muscles with blood, nutrients, oxygen and yes, metabolic waste products in response to intense training.*

By including Taurine and NAC in the new pre-workout, we’ve ensured that you not only have increased blood volume being delivered to the muscles, but that the quality of that blood is improved. N-Acetyl-L-Cysteine (NAC) increases the amount of erythropoietin (EPO) in the body, in turn increasing red blood cell production. Red blood cells (RBC) are the oxygen carriers, specifically hemoglobin, and levels of hemoglobin were increased 9% in study participants.*

This improves anaerobic performance and overall exercise performance by decreasing exercise induced oxidation. It increases post-exercise glutathione (anti-oxidant status) by over 30%, which means faster recovery. The cherry on top is that it increases the plasma level of EPO by over 20% and haemoglobin by 9%.*

This quantity will increase your power output and overall muscle performance. It will also increase Nitric Oxide. (Intracellular calcium determines the activation of endothelial nitric oxide synthase (eNOS), with the production of higher quantities of nitric oxide.) There’s also a hike in fat metabolism so you’re getting leaner with every rep.

When it comes to serious training, you must have a plan and a purpose. But, if you’re in the gym and you don’t have the razor-sharp focus of a decorated sniper, you aren’t going to have the kind of “next-level” workout that creates results. You need the perfect combination of intense motivation, decreased perception of exertion (how damn heavy the weights feel) and most importantly… focus!*

We have included what we think are the best-of-the-best in terms of delivering the kind of mental acuity that allows you to block out the world and become single-minded about your training. This is a component that many pre-workout supplements either ignore, or include ingredients at ineffective levels in the hopes that you will see an ingredient that you recognize, but that is included at such a small level that it would be completely ineffective.*

We have included two ingredients that are considered by most cognitive researchers to be two of the best neurocognitive enhancers out there; Alpha-GPC (α-glycerolphosphorylcholine) and Lion’s Mane Extract (Hericium erinaceus). Alpha-GPC is an ingredient that is considered to be the ideal way to deliver choline across the blood-brain-barrier (BBB). The brain needs a steady supply of choline to act as the raw material for acetyl-choline.*

Lion’s Mane extract is a type of mushroom that has had an increased level of attention recently for its ability to increase the amount of a brain factor known as NGF, or nerve growth factor. This is extremely important since the connectivity in the brain (essentially the way the brain thinks) is dependent on growth of neurons.*

Together these work with caffeine to promote energy and contributes to neuro-cognitive function that helps deliver sharp focus and that in-the-zone feeling critical to powering through extreme workouts.*

We have included two of the most effective nutrients that each have distinct activities within the body to maximize the impact of each ingredient. We have used a black pepper extract called piperine that is over 95% pure and a branded ingredient called Cinnulin PF that is highly concentrated standardized for Type-A double-stranded polymers.*

Think about why you’re working out. You train to get results. Choose a supplement that is as committed to those results as you are. With a product with a formula this strong it typically means you’re going to have to grit your teeth to get it down, not with IMPACT Igniter.

IMPACT Igniter has a flavor system to match the “spine-tingling” effects of its formula. We have used a triple-patented flavor technology that results in a perfect balance of sweet and tart notes that delivers an absolutely delicious and clean-tasting pre-workout. IMPACT Igniter comes in two flavors that will have you looking forward to your next workout, Fruit Punch and Blue Raspberry!