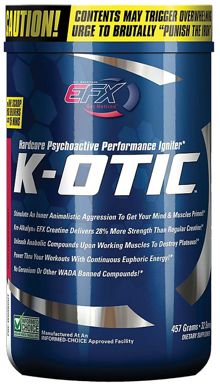 Go to Store
Quick Links to Deal PricesHow does this work and how do stores get listed? See our disclosure below to learn more.
Select Variation(s):
Size
Deal Price
32 Servings
$27.95
Go to Store
Go to Store
Compare store prices
See all All American EFX Products on PricePlow

All American EFX has been researching pre-workout formulas for well over 2 years. We wanted to make darn sure we developed the very best product we could possibly offer. And one way to do that was to see exactly what we were up against. So we literally bought and used no less than 9 of the leading formulas and put them all to the test. Here's what we found...

These things are supposed to be about ENERGY. But we encountered 2 major issues with them. #1: We either lost energy during our training, which KILLED our intensity and power or #2: We suffered a severe post workout crash to the point where most of us didn't want to do jack for the rest of the day. Either way we wanted to AVOID both of these training killers at all cost.

The majority also gave us stomach aches, and some also produced what we called a "geranium hangover". To be fair, there were a couple of standouts in the mix. But we knew there had to be a way to slam something down, go "punish the iron" with maximum brutal intensity, and then leave the gym feeling like we'd really killed it that day. Isn't that why we put our bodies thru hell and back?

So we set out to fix what we saw as major flaws. Then, we dialed in the formula by innovating it with some pretty aggressive and innovative technologies. The end result is a product that offers you a way to experience the most hardcore workouts ever! You get everything you need in just one hyper-concentrated dose to go in and "Punish The Iron"!

1. Stimulate An Inner Animalistic Aggression To Get Your Mind & Muscles Primed!

Let's face it. Some days you just don't feel like training. And on others, you have a good workout, but you know deep down you could do even better. K-OTIC is the answer! Not only will you get jacked up, but you will literally WANT to train like an animal. What more do we need to say?

High powered, hardcore training demands you have the best creatine fueling your hard working muscle cells. Hands down, Kre-Alkalyn EFX is that creatine. This multi-patented, multi-award winning compound has been shown in clinical studies to outperform the gold standard, creatine monohydrate, by a whopping 28%. Can you say "swole"?

Not only will you have the strength and muscle-gorging advantage of Kre-Alkalyn EFX creatine, but you also get beta Alanine, AKG, Citrulline-malate (all using our exclusive Dextro-CyclodizedTM delivery technology) working for you. But wait! You also get a healthy shot of our highly potent anabolic amplifier Taxadrol. Nothing ramps up strength and aggression like testosterone! Heads will turn when you start repping with what used to be your 1 rep max!

Don't be fooled by products that recommend one scoop, but then tell you to use up to 3 (which is the 'real' dose!). Look. All you need is one small scoop of K-OTIC to turn you on! And forget about an upset stomach or workout killing energy crashes. We fixed that mess. You WON'T be sprinting to the bathroom...and you WON'T crash and burn! Fact is, your training partners will freaking quit on you while you scream, "Next Set!"

5. No Geranium Or Other WADA Banned Compounds!

We didn't we join the "ingredient of the month" club and use Geranium in K-OTIC for two major reasons. For one, it's banned by WADA. We have countless professional and Olympic athletes who trust us, so it wasn't even an option. Second, we hated the after-effects across the board. K-OTIC isn't some gimmicky pre-workout product, this is a serious tool for hardcore athletes. If you aren't willing to pay your dues one hard set at time, then K-OTIC isn't for you!

K-OTIC is literally going to hit you fast and right between the eyes. Because of its unique delivery system, you'll be primed in as little as 15 minutes for an all-out war against the iron. It'll jumpstart your neurotransmitters while simultaneously flipping the switch on your inner animal aggression. You'll experience a new feeling of "domination" from our anabolic amplifier Taxadrol. We've added just enough to help you bulldoze through your toughest workouts by giving you added mental and physical drive.

K-OTIC may push you closer to a new personal record with every training session, and its key anabolic compounds will help you add the strength and confidence to pull it off. Some days your progress will not be measured by a new single rep increase, but maybe 3... 4... or even more!*

The single scoop sustained-release energy of K-OTIC happens in continuous "stealth" phases with no lag time. This means you're pushing all the way through your workout with the same drive you had on the first rep of the very first set! You'll "Punish The Iron" one hardcore rep at a time. You may also experience rock-hard fullness, pumps and swole.