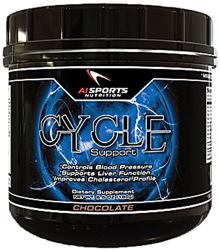 Go to Store
Quick Links to Deal PricesHow does this work and how do stores get listed? See our disclosure below to learn more.
Select Variation(s):
Size
Deal Price
60 Servings
$42.24
Go to Store
Go to Store
Compare store prices

Cycle-Support is the hardcore athletes best friend. Many people always fear when they decide to take their training to the next level that there will be side-effects and other unwanted conditions resulting from adding in synthetic compounds. With Cycle-Support in the mix, athletes can worry a little bit less about such effects.*

Cycle-Support helps maintain healthy hormone balances, boost immunity, and helps organs fight off some of the toxic effects from using PH’s or any other synthetic muscle building compounds. Protecting the body's health is very important. Can you afford to do your next cycle without it?*

Milk thistle nutritionally supports the liver's ability to maintain normal liver function. Milk thistle works due to its ability to inhibit the factors responsible for liver damage, coupled with the fact it stimulates production of new liver cells to replace old damaged ones.*

Silybin is a part of the chemical structure of the flavoligan silymarine. Milk thistle's hepatoprotective effects may be explained by its function of altering the liver cell membrane structure, blocking the absorption of toxins into the cells. Hepatoprotection by silymarin can also be attributed to its ability to increase the intracellular concentration of glutathione, a substance required for detoxicating reactions in liver cells. Milk thistle is also an antioxidant that is more potent than vitamins C and E.*

One animal study found that silymarin (an active compound in milk thistle) worked as effectively as the cholesterol-lowering drug probucol, with the additional benefit of substantially increasing HDL ("good") cholesterol. Further studies in people are needed.*

Produced by the body, N-acetylcysteine (commonly called NAC) is a form of the amino acid cysteine. Because it enhances the production of the enzyme glutathione, one of the body's powerhouse antioxidants, NAC can play an important role in boosting the immune system. Studies have shown that glutathione levels are often reduced in people with certain conditions related to the immune system.*

For more than three decades, NAC has been used as a mucolytic ("mucus dissolving") agent to help break up the thick mucus often present in people suffering from chronic respiratory ailments. When administered intravenously, NAC has also proved invaluable in the treatment of acetaminophen overdose; it appears to protect the liver from this potentially toxic substance. Now widely available in supplement form, NAC is currently being recommended for preventing and treating a wide variety of ailments that may respond to its antioxidant properties.*

Hawthorne Berries have been used since the 19th century to support the heart, and to normalize cardiovascular functions. Today, Hawthorne Berries are one of the most popular herbs used in Europe, and gaining wider acceptance in the United States. Primary chemical constituents of this herb include Vitamin C, flavonoids (quercetin, quercetrin), glycosides, proanthocyanidins, anthocynaidins, saponins, tannins, and cratetegin (most prevalent in the flowers, then leaves, then berries).*

Hawthorne Berries appear to work best when taken as a preventative herb, possibly helping reduce the risk of cardiovascular disease. With its high content of bioflavonoids, Hawthorne Berries best support the heart. Hawthorne increases the body's ability to utilize oxygen, and the heart's ability to utilize calcium. This herb can actually help regulate both high and low blood pressure, in addition to slowly breaking down cholesterol and fat deposits in the body. The bioflavonoids help strengthen the contractive force of the heart, and gently dilate & relax the coronary blood vessels, improving overall circulation. For this reason, Hawthorne Berries have been used to lower high blood pressure & high cholesterol, as well as increase low blood pressure.*

Another action of policosanol is to reduce the proliferation of cells on the lining of the arteries. Healthy arteries are lined with a smooth layer of cells so that blood can race through with no resistance. One of the features of diseased arteries is that this layer becomes thick and overgrown with cells. As the artery narrows, blood flow slows down or is blocked completely. Policosanol was tested for its ability to stop the proliferation of these cells. According to the results, policosanol's ability to stop cell overgrowth is in agreement with the antiproliferative effects reported for other lipid-lowering drugs, such as most of the statins.*

Idebenone is an analog of the very popular CoQ10. In most respects, Idebenone shares its traits with Coenzyme Q10 and like Coenzyme Q10 is might be useful for aging. It differs from it in some important ways, which may make it more useful. Under certain circumstances, Coenzyme Q10 (CoQ10) may become a pro-oxidant. These circumstances are conditions in which hypoxia or lack of oxygen occurs.*

Saw Palmetto is a small, palm-like plant native to North America. Native Americans and early American settlers used the berries to treat problems associated with the genitals, urinary tract and reproductive system. This herb is called the "plant catheter" due to its therapeutic effect on the neck of the bladder and the prostate in men. Saw Palmetto is widely used in Germany, Canada, the United Kingdom and now the U.S. for nutritionally benefiting the prostate and urinary tract. It has been marketed as an aphrodisiac for both men and women.*

The roots of stinging nettle may be used to relieve the symptoms of benign prostatic hyperplasia (BPH) -- a non-cancerous enlargement of the prostate gland. The prostate is part of the male reproductive system. The urethra, the tube that carries urine out of the body, passes through the prostate gland. For most men, BPH is a normal part of aging. An enlarged prostate may cause men to have trouble starting or maintaining urination, need to urinate more often, have urine leaks, or need to urinate during the night. Stinging nettle root contains chemicals that may prevent or delay the growth of prostate cells by interfering with an enzyme. In several studies, nettle root products have shown general effectiveness for relieving the symptoms of BPH. Frequently, it is included with other herbals such as pygeum and saw palmetto in "Prostate Formulas". It has also been known to reduce the levels of serum Sex Hormone Binding Globulin, which binds to testosterone in the blood and renders it inactive.*

As one of several phytosterols, plant compounds with chemical structures similar to that of cholesterol, beta-sitosterol is commonly found in foods such as wheat germ, soybeans, and corn oil. Over the past few years, concentrated extracts of this particular phytosterol have been tested for lowering cholesterol and lessening such discomforts of benign prostatic hyperplasia (BPH) as frequent and painful urination.*

Other purported benefits of Beta-sitosterol include boosting immunity and normalizing blood sugar, relieving inflammation, healing ulcers, enhancing uterine tone, and alleviating cramps. However, these health benefits of beta-sitosterol have not been substantiated by scientific evidence.*