Click the button above and PricePlow will email you with updates from 360CUT. 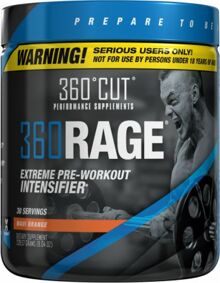 360RAGE is designed to be the most explosive and energizing pre workout formula on the market.*

Combined with intense stimulant factors and nitric oxide enhancers, 360RAGE will help give you the power to blast through your most grueling workouts.*

Is a non-essential amino acid that is used by muscle cells to synthesize carnosine which functions as a buffer for the hydrogen ions (acid) produced during strenuous exercise, thus helping to maintain optimum muscular pH and delaying fatigue. Beta Alanine may promote increased power output and anaerobic endurance while delaying fatigue and supporting increases in lean muscle mass.*

Is a compound consisting of citrulline, a nonessential amino acid that is primarily found in melons, and malate, an apple derivative. Citrulline is used to enhance nitric oxide (NO) production and for the detoxification of ammonia levels. Ammonia is a toxic byproduct of muscle metabolism that can decrease performance. Benefits include increased nitric oxide production, increased ATP and phosphocreatine recovery, and supporting muscle recovery. For the past 20 years, citrulline malate has been used in Europe to support energy.*

Is a naturally occurring compound, formed when arginine breaks down in the body. Agmatine is specifically classified as a neurotransmitter and is synthesized and stored in the brain for later use in nerve, synapse and hormone signaling functions. Benefits of agmatine use include increased growth hormone output, increased IGF-1 output, increase luteinizing hormone output, creates an ideal environment for better insulin sensitivity, increases nitric oxide through multiple different pathways, acts as an anti-oxidant, helps build muscle, helps burn fat and may actually help offset pain associated with over-training.

Is a highly natural extract derived from grape seeds. It's an antioxidant rich in bioflavonoids that can help cellular damage caused by free radicals. Grape seed extract is known to enhance blood flow and oxygen transport to the muscles, which in turn can improve athletic and exercise performance and endurance.

Derived from the pine bark of a tree known as Pinus pinaster. It is also used in athletes to improve performance and endurance.*

Is an analog of the branched chain amino acid, valine that can be found in foods such as dairy, meat, grains, soy and peanuts. It is an inhibitor of the enzyme, arginase. L-Norvaline can promote increases in muscle strength, growth and endurance by blocking the activity of arginase—an enzyme that inhibits the formation of nitric oxide within the body. Restricting the body's natural production of arginase frees the NO pathways resulting in a greater supply of arginine that can result in greater pumps, increased vasodilatation, and supporting blood flow.*

Is an essential amino acid and a precursor of the neurotransmitters dopamine, norepinephrine, epinephrine (adrenaline) and the thyroid hormones.*

Is a central nervous stimulant, can be specifically beneficial for extended, exhaustive and high intensity exercise. Blocks inhibitory neurotransmitter Adenosine, increasing the firing of neurons and the concentration of neurotransmitters like dopamine and norepinephrine.

Is derived from the Citrus aurantium fruit, which is used for a variety of purposes in traditional Chinese herbalism. Benefits include: increased alertness, energy, metabolism, appetite reduction and thermogenic fat burning.*

Is a naturally occurring alkaloid found in plant-life like barley. It's known to have cognitive-supporting benefits like improving mental focus and boosting concentration. It also can lift mood and provide energy.*

Toothed Clubmoss is a natural source of Huperzine A, a potent active compound used to support memory, learning, and concentration.* Toothed Clubmoss Herb Extract can be used to help enhance short and long term memory through boosting Acetylcholine (Ach) levels. Acetylcholine is the main neurotransmitter in the brain involved with memory.*

Click the button above and PricePlow will email you with updates from 360CUT.