Click the button above and PricePlow will email you with updates from Vital Choice. 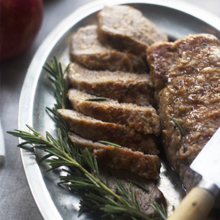 Tenderloin the tenderest pork cut of all, and choicer than pork loin.

Leaders in humane pig husbandry
The pure, delicious pork we’re proud to offer is the savory fruit of a vision.

That holistic vision is what drives ninth-generation farmer John Arbuckle and his wife Holly, the co-founders of Missouri’s Singing Prairie Farms.

John — a self-described “pork nerd” — has become a leader in the campaign to simultaneously raise the quality of pigs’ lives and the nutritional and health quality of pork.

Holly and John raise their pigs humanely, without drugs, and let them forage freely on pure, rich, pasture.

They farm naturally without agri-chemicals, sow their fields with diverse, pig-friendly plants, and practice rotational grazing to enrich the soil.

The Arbuckles strive to continually raise the proportion of forage in their animals’ diet and minimize the amount of grain, which is already comparatively small.

As a result, pork products from Singing Prairie Farms are nutritionally superior and free of drug residues — and the animals live healthier, happier lives!

Lab tests commissioned in 2017 by Singing Prairie Farms confirmed that the general picture of pasture-raised meat — higher in omega-3s and lower in omega-6s — applies to their pork.

They sent samples of meat from three test groups. The pigs in each group were raised on pasture, but were allowed differing amounts of supplemental grain:

Meat harvested from each group was lab-tested for omega-3 and omega-6 fats.

These were the resulting ratios of omega-6 to omega-3 fats:

Versus standard, grain-fed pork, the omega-6:3 fat ratios produced by every variation in the feed regimen of pasture-raised Singing Prairie pork look a lot lower/healthier:

Click the button above and PricePlow will email you with updates from Vital Choice.