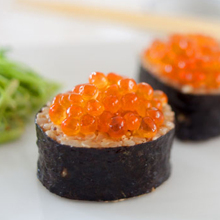 NOTE: To ensure optimal quality, our 1-jar and 3-jar options (FSE201 and FSE203) must be ordered with at least one other perishable (cold) product.

Delicate salmon roe – called "ikura” in Japan – is highly prized by caviar lovers around the world.

Native Alaskans report that salmon roe is an excellent first semi-solid food for infants, introduced at about eight months.

Click to see kids sampling and savoring our ikura at the 2011 Wise Traditions conference.

In addition, salmon roe is extraordinarily rich in phospholipid-form omega-3s — 40 to 70% of total omega-3s, versus 1% in salmon flesh — which are extraordinarily well absorbed by the fetal brain.

As the study's authors noted, "Results from some clinical trials have reported an enhanced bioavailability of krill oil over that of conventional fish oils, which has been speculated to be an effect of krill’s unique enrichment of EPA-and DHA- in the phospholipid form. Often dismissed as extravagant delicacy caviar represents a rich source of both omega-3 fatty acids and dietary phospholipids.”

And while krill oil is unusually rich in phospholipid-form omega-3s — compared with other fish and marine oils — salmon roe is an even richer source.

In fact, the Canadian study* found that the amounts of EPA and DHA-containing phospholipids in one serving of salmon caviar were almost eight times greater than the amount in one capsule of krill oil: 1097±34 mg vs. 138±8 mg. (Lacombe RJS et al. 2014).

She also notes that 40% to 70% of the omega-3 DHA in salmon roe occurs in the phospholipid-form, versus only 1% of the DHA in salmon flesh.

What People Say
"I absolutely adore your Ikura! ... Time to go fetch more from the freezer..." – Andrea Frankel

Learn this food's omega 3/6 balance, and why it matters.