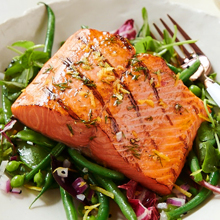 The length of a salmon’s birth river directly governs the amount of fat the salmon must accumulate before beginning its journey upstream to spawn and die.

The Fraser’s tributaries and headwater lakes are the spawning grounds of several species of salmon, and this river ranks as the biggest source of salmon borne in British Columbia.

Fraser sockeye spend their first two years in the river, then swim out to sea where they mature over another two years, getting steadily bigger and fattier.

Once fully matured, they return to the Fraser and swim upstream to their original birth waters, where they spawn and die, allowing the cycle to begin again.