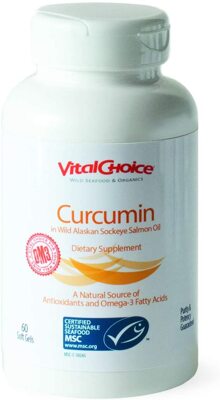 Turmeric grows wild in the forests of South and Southeast Asia, and is cultivated for culinary and medicinal use. It's a key ingredient in the yellow-orange curry spice blends used in many Indian, Persian, Thai, Chinese, and Indonesian dishes.

The orange-yellow "curcuminoid" compounds that give turmeric its rich hue are believed responsible for the root's potential health benefits*.

Researchers use the term "curcumin" in reference to three specific curcuminoids, which appear largely responsible for its beneficial effects.

Together with modern epidemiological evidence from India, where turmeric root and turmeric-rich curries are dietary staples, its ancient healing tradition has triggered extensive research into the possible health-promoting properties of curcumin. (To learn more, click here.)

Among other things, curcumin appears to exert beneficial effects on gene switches affecting inflammation, which is a factor in many degenerative processes*.

Thankfully, clinical studies show that the curcumin extract we use - BCM-95 (also known as Curcugreen) - is absorbed 7 to 9 times better than curcumin in conventional supplements (Antony B et al. 2008).

This advantage means that one 500mg serving (two softgels) of Vital Choice Curcumin is equivalent to about 3,000mg of a typical curcumin supplement.

And curcumin is absorbed much better when it's consumed along with fats, so we mix it into Vital Choice Wild Alaskan Sockeye Salmon Oil, which provides beneficial omega-3s fatty acids (Goindi S et al. 2010; Jäger R et al. 2014).

The BCM-95 extract includes turmeric's volatile compounds (e.g., turmerones, curcumenes, zingerbene), which enhance the absorption of curcumin, and provide benefits of their own.

Last but not least, the Indian firm that makes our curcumin extract is widely recognized for its pioneering "green" practices (see their video at YouTube).

*These statements have not been evaluated by the Food and Drug Administration. This product is not intended to diagnose, treat, cure or prevent any disease.