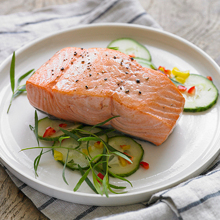 The Copper River is the 10th largest river in the United States …a massive, mile-wide monster that drains 24,000 square miles of Alaskan territory and drops an average of 12 feet per mile.

After spending from one to five years at sea, king salmon born in the Copper River must swim 300 miles upstream against a speedy seven mile-per-hour current and through rapids and narrow, fast-rushing canyons to reach their spawning grounds.

Migrating salmon do not feed during their epic upstream struggle … and over thousands of years, Copper River kings acquired the instinct to accumulate the extra "fuel" reserves needed to reach their distant spawning grounds.

Because their epic effort requires such huge fat stores, these "thoroughbreds" among wild salmon grow rapidly in the ocean, often doubling their weight during a single summer season.

As a consequence, Copper River king salmon is incredibly luscious, with twice the fat of other wild salmon per serving, and 25 percent more fat than other king salmon.