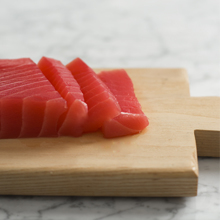 Considered the filet mignon of tuna, our premium ahi saku is a uniformly precision-cut portion of center-cut tuna loin, perfect for making sushi, sashimi, and tataki. Individually line-caught by small-scale fisheries in Indonesia. Because the freezing process renders tuna safe to serve raw, our saku blocks are perfect for making raw-fish delicacies, such as:

You’ll find storage and thawing instructions under our Serving/Care tab, and suggested recipes under our Recipes tab. (Recipes for albacore tuna will work very well with yellowfin tuna.)

Known also as yellowfin (Thunnus albacares), our ahi saku comes from an artisanal Indonesian fishery in the Western Central Pacific Ocean, earned a Green/Best-Choice ranking from the Monterey Bay Aquarium Seafood Watch program. The delicious flesh of these torpedo-shaped, highly migratory fish is highly prized for sashimi and sushi

Our yellowfin tuna comes from a sustainable Indonesian hand-line fishery that protects dolphins as it delivers top-quality tuna. Unlike their Indonesia-area counterparts, yellowfin tuna (Thunnus albacares) in the eastern tropical Pacific often mingle with dolphins.

In the past, many dolphins drowned in tuna nets off Mexico and southern California. Thanks to stricter U.S. regulations, many fewer dolphins (about 1,000 annually) now die in that region.

Why is our yellowfin tuna red rather than brown?

Yellowfin sold in the U.S. is often exposed to synthetic carbon monoxide (CO) gas. Exposure to CO gas preserves tuna’s natural reddish-pink color, but will also make old fish appear fresher than it is, because tuna treated with CO stays red even after it spoils.

Instead of synthetic CO gas, our tuna is exposed to filtered, flavorless smoke from certified-pure hardwoods. This preserves the tuna’s natural reddish-pink color, but it cannot mask old fish, because smoke-treated tuna will turn brown long before it begins to spoil.