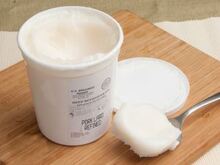 In the 19th century the Mangalitsa pork lard was substituted for butter when cream was short in the 18th century ketogenic diet world.

The fat itself is unusually healthy for pure lard. The fats are both non-saturated and polyunsaturated fats. As a bonus, they are also high in omega 3 fatty acids as a result of the green plants in their diets.

In Europe, the breed originated in Hungary and soon traveled to Germany, Scotland, and Sweden where the gourmet heavily marbled meats were a delicacy along with the exquisite tasting rendered lard.

However, in the 20th century the breed almost went extinct if not for a university professor in Europe who understood the unique value proposition of the smart fats. The professor purchased most of the pigs from an estate auction of one of the last remaining herds in Europe. A short time later some were sold to USA buyers, and now there a few clusters of producers in the USA.

US Wellness is excited to offer this product from one of the early Missouri pioneers of Mangalitsa pork in the USA.

One container averages 1.5 pounds each.