Click the button above and PricePlow will email you with updates from Ultimate Nutrition. 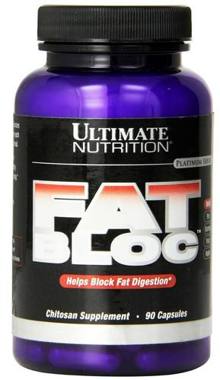 People are concerned about how they look and are preoccupied with weight and weight loss. However, despite this concern about weight, more and more of us are becoming overweight.

It is small wonder, then, that we are looking for natural alternatives to weight management and weight control. Among them, chitosan stands out for its ability to trap fat before it is absorbed in the body. Chitosan is a naturally occurring fiber derived from the complex sugar (polysaccharide) found in the shells (exoskeletons) of shrimp, crabs and other shellfish. Chitosan has the capacity to bind lipids and fats. More importantly, since it is not digested, chitosan has no calories.*

Upon oral ingestion, chitosan binds to the intestinal lining, where it tightly binds dietary fats and lipids before they are absorbed in the body. As a result, the dietary fat is prevented from entering into the bloodstream. When dietary fat is bound to the chitosan fiber, it becomes a large mass, which cannot be absorbed in the body. Chitosan fibers differ in their structure from other fibers in that chitosan possesses a net positive charge. This positive charge attracts negative charges on the fats, lipids and bile acids. Since chitosan fiber is not metabolized, it is cleared from the body along with the fat in the fecal material.*

Published reports have shown that chitosan works in concert with vitamin C. It has been suggested that the action of chitosan may be enhanced by as small an amount of vitamin C as 10mg. Used alone, ingestion of 500mg chitosan before a meal rich in fat helps reduce "bad" (LDL) cholesterol. The "bad" cholesterol is bound to bile acids secreted by the liver into the intestine, where its reabsorption is prevented by chitosan fibers.*

This dietary fiber is an indispensable adjunct to a balanced weight management program. Fibers also play an important role in cleansing the gastrointestinal tract, which stimulates the digestive processes and promotes intestinal health.*

Click the button above and PricePlow will email you with updates from Ultimate Nutrition.