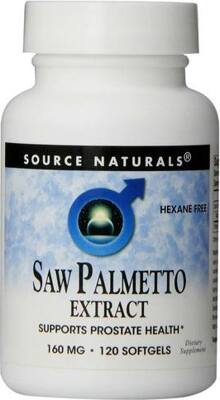 Go to Store
Quick Links to Deal PricesHow does this work and how do stores get listed? See our disclosure below to learn more.
Select Variation(s):
Size
Deal Price
30 Softgels
$6.64
Go to Store
120 Softgels
$27.65
Go to Store
Go to Store
Compare store prices
See all Source Naturals Products on PricePlow
Ingredients

Native to the Southern Atlantic coast of the United States, the saw palmetto berry was used by Native Americans for a variety of health concerns, and was found especially useful for older men. Numerous studies have shown that the berry contains fatty acids which may inhibit the conversion of testosterone into dihydrotestosterone within the prostate. Two Source Naturals Saw Palmetto Extract softgels contain the exact amount (320 mg) and concentration of saw palmetto fatty acids (85-95%) administered in clinical trials.

Native to the Southern Atlantic coast