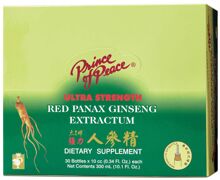 Go to Store
Quick Links to Deal PricesHow does this work and how do stores get listed? See our disclosure below to learn more.
Size
Deal Price
30 Bottles
$4.24
Go to Store
Go to Store
Compare store prices
See all Prince of Peace Products on PricePlow
Ingredients

The Most Valuable Herb in the World!

Traditionally used as a tonic herb for those who want to support their body's energy system, it is also known as an adaptogenic which supports the body's immune system and also believed to help support the balance and harmony between various systems of the body.