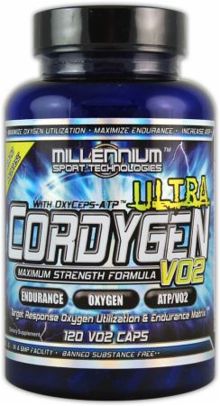 Cordygen-VO2 ULTRA contains OxyCeps-ATP our strongest cordyceps hybrid strain to date which is biomass cultured for maximum HEAA (hydroxyethyl-adenosine), Beta 1,3/1,6-Glucan (45%), Adenine, Alpha Glucan (6%), 3-Deoxyadenosine and polysaccharide (75%), content. It allows for rapid oxygen assimilation, absorption and utilization while providing maximum ATP levels. The Cordygen-VO2 ULTRA strain is also one of the most adaptogenic of any strain available supporting adrenal cortex function and promoting homeostasis of the body.* The Cordygen-VO2 ULTRA strain requires a six month growth period where it is subjected to gas, temperature and atmospheric pressure changes to simulate its native high altitude environment. This culturing process allows for maximum active constituent content from every portion of its life cycle to provide its powerful effects. The OxyCeps-ATP strain alone may support oxygen utilization and ATP as a standalone ingredient but we’ve sweetened the pot & bolstered the products potency by adding two powerful O2 enhancing adaptogens that make Cordygen-VO2 ULTRA one of the most powerful oxygen utilization and endurance products available!*

Jiaogulan is a powerful adaptogen containing 82 known saponins called gypenosides. Many of these gypenosides including 3, 4, 8 & 12 are responsible for Jiaogulan’s positive effect on oxygen absorption and utilization. Jiaogulan also may increase nitric oxide synthase which can lead to increased nitric oxide levels to further support cardiovascular function. This shows the powerful ability of Jiaogulan to effectively and efficiently deliver oxygenated blood to the muscles for optimal endurance and performance.*

Jiaogulan displays powerful antioxidant properties bolstering endogenous SOD (superoxide dismutase) levels in clinical trials. SOD is a powerful antioxidant that has suggested in studies to be directly related to longevity. The increase in SOD levels increase the overall value of Jiaogulan in Cordygen-VO2 because it aids in quenching exercise induced free radicals.*

Studies conducted in Japan, China and Germany suggested continuous use of Jiaogulan may help support lipid, & glucose metabolism.* The combination of lipid and glucose metabolism with increased oxygen utilization make Jiaogulan the perfect fit for Cordygen-VO2 ULTRA and anyone who wants to support fat loss during aerobic exercise. Jiaogulan may help athletes gain and retain lean muscle mass due to aiding nutrient assimilation.*

Rhodiola Rosea (also known as Tibetan Rhodiola) is a cooling adaptogen that has been suggested in many studies and used by the many cultures including Tibetan Sherpas, the Chinese and Russians to increase the capacity for work. Rhodiola Rosea even in small amounts can have a positive effect on oxygen absorption, saturation and utilization. Rhodiola supplementation in clinical studies has suggested the ability to increase ATP and creatine phosphate (CP) above baseline levels. Rhodiola has also been suggested to increase muscle glycogen levels while decreasing lactic acid and ammonia. Rhodiola may promote mental clarity, focus and willingness to work and perform by supporting optimal serotonin & dopamine levels.* Proper neurotransmitter levels are crucial to keeping your head in the game.

Cordygen-VO2 ULTRA is one of the only products of its kind to incorporate these three incredibly powerful adaptogens at high potency, all of which aid in maximizing oxygen absorption, oxygen utilization and cellular energy. Cordyceps, Jiaogulan and Rhodiola also positively influence the adrenal cortex offering comprehensive adrenal support to those who abuse stimulants or are under large amounts of stress. Strengthening the adrenals is crucial in balancing normal hormone levels to support performance, weight loss and overall health. We all know what increased oxygen utilization, ATP and creatine phosphate (CP) levels can do for athletic performance, but couple that with heightened intra-muscular glycogen levels, pin point mental focus, decreased lactic acid and ammonia levels, and endurance & strength can be pushed to new limits.

A balanced electrolyte blend has been added to supplement the crucial loss of cell salts during intense training allowing for prolonged effects.

Whether you are a weekend warrior looking to run circles around your friends, a soccer mom looking to burn fat more efficiently during cardio sessions or an elite professional athlete looking for a “competitive secret weapon” Cordygen-VO2 ULTRA will meet your performance needs.

Q: What should I expect from Cordygen-VO2 ULTRA?

A: It may support oxygen utilization, endurance and performance in as little as a 2 capsule dose.*

Q: How should I take Cordygen-VO2 ULTRA?

A: Cordygen-VO2 ULTRA can be taken in a few ways. It is effective in doses as low as two to three capsules and in larger doses up to six capsules. We recommend taking a 3-6 capsules of Cordygen-VO2 ULTRA 45-60 minutes before any activity where the more oxygen utilization and ATP are needed. For best results Cordygen-VO2 ULTRA should be taken on non-training days as well but you can reduce the dose to 1-2 capsules.

A: Yes, Cordygen-VO2 ULTRA is completely safe and non-toxic.

A: Yes, Cordygen-VO2 is 100% legal. Cordygen-VO2 ULTRA is formulated and manufactured without the use of any banned substances and conforms to WADA and IOC standards.

Q: Is Cordygen-VO2 ULTRA really that much better than other cordyceps products including bulk powder?

Q: How long until I feel the full effects of Cordygen-VO2 ULTRA and do the effects fade when I discontinue use?

A: You will feel the effect of Cordygen-VO2 ULTRA with the very first dose but it does take about 4 consecutive days of supplementation before maximum effects can be felt. Full effects from each dose last as long as 6 hours and residual effects can be felt as long as 12 hours later. You will notice that you lose some of the effects when you discontinue use but gains in VO2 max from your increased training should remain with you.

Q: Are there any side effects?

A: May result in loose stool. If this happens reduce the dose. We have formulated Cordygen-VO2 ULTRA to be much easier on the stomach than the original Cordygen-VO2.

Q: How will Cordygen-VO2 ULTRA affect my cardio and fat loss regimen?

A: We all know that the better the body processes and utilizes oxygen the more efficient it can metabolize fuel including fat. There is solid clinical evidence that jiaogulan and cordyceps can increase fat loss due to the increased ability to burn fat for fuel during cardiovascular exercise. This may also be one of the reasons that endurance athletes don’t hit the wall as soon during intense long term training or competition these compounds. The body can more easily burn fat for fuel when glycogen levels are depleted.*

Kucinskaite A, Briedis V, Savickas A. Experimental analysis of therapeutic properties of Rhodiola rosea L. and its possible application in medicine. Medicina (Kaunas.). 2004;40(7):614-9