Click the button above and PricePlow will email you with updates from LiveLong Nutrition. 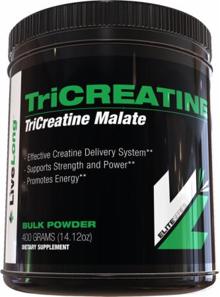 THE KING OF CREATINE

TriCreatine Malate is produced by binding three Creatine molecules to Malic Acid. The end result is a product that helps support ATP levels, increases muscle mass, enhances strength and power, while at the same time avoiding some of the unpleasant side effects that classic Creatine Monohydrate seems to bring with it.* TriCreatine is much more soluble in water, which leads to enhanced absorption and decreased gastric disturbance. Put another way, TriCreatine Malate gives you all the benefits of Creatine, without the bloat and upset stomach that so many users have reported when taking the simple monohydrate form of Creatine.*

What makes TriCreatine Malate even more incredible is the Malic Acid which binds the three Creatine Molecules. Malic Acid is a necessary ingredient in the krebb’s cycle, which is how our body makes energy. During intense exercise, Malic acid is depleted and Lactic Acid levels rise, giving way to sore, tired and achy muscles. By supplementing with TriCreatine Malate, users are effectively increasing their Malic acid levels which may help decrease muscle soreness, increase post workout recovery and enhance overall physical performance.*

CREATINE:
THE NEXT GENERATIONG

TriCreatine Malate from LiveLong Nutrition will change the way you look at Creatine forever. With this highly advanced formulation combining Malic acid and three Creatine molecules, users report mind-blowing pumps, explosive strength, increased muscle mass and enhanced post-workout recovery.* If you are looking for a bloat-free, stomach friendly, and quickly absorbed form of Creatine that will supercharge your workouts, then look no further than TriCreatine Malate from LiveLong Nutrition!

Click the button above and PricePlow will email you with updates from LiveLong Nutrition.