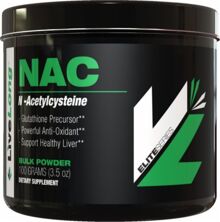 NAC from LiveLong Nutrition contains a powerful antioxidant, N Acetyl-Cysteine, that offers a wide range of physical and mental benefits. NAC has been studied for decades because of its unique ability to provide protection from oxidation, both directly and indirectly through its conversion to Glutathione and the stimulation of Glutathione production.* NAC is an excellent liver health support amino acid, and may benefit a number of other systems, including energy production, mood support and exercise recovery.* If you’re serious about optimizing your antioxidants and training hard, then NAC will be an unbeatable resource in your supplement arsenal. If you are interested in supporting longevity, well-being, and emotional support, then again, NAC delivers unprecedented promise.*

NAC from LiveLong Nutrition is a unique, sulfur containing amino acid, that promotes antioxidant health in two ways. First, it acts as a scavenger of free-radicals, neutralizing Reactive Oxygen Species, which is greatly elevated following intense workouts. ROS can also be elevated during times of stress, as well as exposure to various chemicals, alcohol, and other toxins. Secondly, NAC is a both a precursor to, and a stimulator of Glutathione production, also known as the master antioxidant.* Glutathione is essential to life, acting as the body’s primary antioxidant, protecting us from the onslaught of free radicals and the oxidative damage that occurs upon exposure to these elements. NAC is both a raw ingredient used in the production of Glutathione, and is also an effective stimulator of GSH (Glutathion Stimulating Hormone), which tells the body to increase Glutathione production. NAC also helps support the health of the liver and other important organs.*

AND SO MUCH MORE*

NAC has been in the spotlight for years due to its effect on antioxidant status. Emerging research, however, points out that there may be even more reason to supplement with this amino acid. NAC is not only a scavenger of free radicals, but also helps the brain to balance glutamatergic, dopaminergic and other neurotransmitter pathways.* What this means is that it may offer mood, emotion and stress support.* Studies are already underway investigating the usefulness of this dietary supplement in supporting mental, emotional, and psychological well-being.* NAC also shows potential to be used for supporting mental focus.* Because of its unique effect on Glutamatergic pathways, it may be useful to those seeking to promote brain power, focus, memory retention, and general brain health.*

NAC from LiveLong Nutrition is a perfect addition to any supplement regimen if optimized antioxidant status is important. Whether you train hard, live a stressful life, overindulge occasionally, or wish to support a sharp mind, NAC will impress just about anyone.* If you are looking for better health for the mind and body, then look no further than NAC from LiveLong Nutrition!