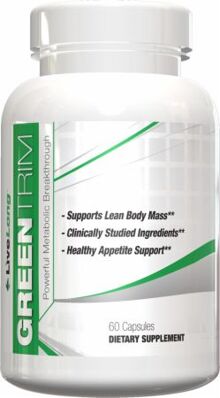 Go to Store
Quick Links to Deal PricesHow does this work and how do stores get listed? See our disclosure below to learn more.
Size
Deal Price
60 Capsules
$17.80
Go to Store
Go to Store
Compare store prices
See all LiveLong Nutrition Products on PricePlow
Ingredients

STUBBORN FAT
HAS MET ITS MATCH

Supporting effective fat loss depends on several key components. GreenTrim from LiveLong Nutrition tackles the toughest of those challenges, helping both professional athletes and bodybuilders, as well as men and women who want to look their best. GreenTrim contains five of the most clinically studied fat loss ingredients on the market today. This unique combination of appetite support, insulin sensitizing and fat releasing ingredients will give you the edge you need when it comes time to prepare for a competition, or to just look great in your favorite swimsuit.*

In order to understand what sets GreenTrim apart from all the other fat loss products available, it’s essential to understand the pitfalls of fat loss, and how to avoid them through the use of carefully extracted ingredients, all combined at precise ratios in order to support success.* An effective fat loss product should address three vital components.

Everyone who has ever tried to lose fat has been faced with cravings and many of us give into those urges, sabotaging our efforts. In order for any fat loss product to work effectively, it must address appetite control. Just as important, it should curb cravings without causing excess jitters or nervousness, which will often times increase the desire to eat “comfort foods” in order to calm the tension. GreenTrim­ contains Garcinia Cambogia which is high in Hydroxycitric acid (HCA). Green Tea extract and Green Coffee Bean extract both have been suggested to have an impressive effect on appetite.* Anytime blood sugars dip too low, cravings will surface.*

When your primary goal is fat loss, it’s essential to limit the amount of food you ingest from becoming stored as fat, also known as triglycerides. Many people don’t realize that overconsumption of carbohydrate can easily signal this fat storage process. Green Coffee Bean extract contains Chlorogenic Acid, which is known for its ability to inhibit glucose-6-phosphatase, which is essential to the formation of glucose from ingested carbohydrate. You read it right. Chlorogenic acid may help the body rely on stored body fat for energy.*

LOSE THE FAT
KEEP THE CURVES.

Lipolysis is a technical term which refers to the release of stored fat to be used for energy. Anything that increases lipolysis may help decrease fat stores, and provide energy to the body in times of caloric deficit. In fact, in an overfed state, Insulin, the master glucose hormone, inhibits lipolysis, which helps explain why eating plenty of carbohydrate can cause a reduction in fat burning. With GreenTrim you can have your carbs and burn fat too! In actuality, every ingredient found in GreenTrim has been clinically tested for its ability to support lipolysis and thus support metabolic markers and support fat loss.* But one particular ingredient, Raspberry Ketones, is the KING of lipolysis. Not only does Raspberry Ketones increase the release of fat from storage, it also increases fatty acid oxidation, which means it also helps burn fat as energy once it’s released from storage!* Raspberry Ketones mimic the effect of Norepinephrine on an enzyme known as Hormone Sensitive Lipase (HSL). In essence, when the body is in a fight or flight state, and Norepinephrine levels are increased, Hormone Sensitive Lipase is increased, allowing fat to be released from cells for energy. With Norepinephrine release, however, comes a host of side effect such as jitters and nervousness.* With Raspberry Ketones, you get the benefits of supporting HSL and none of the side effects associated with Norepinephrine.*

GreenTrim contains everything you need to assist you in your fat loss efforts, and what’s more; Once you’ve burned the fat off, GreenTrim works to keep it off. All five ingredients in GreenTrim have been clinically studied for their effectiveness. If you are serious about your body, passionate about your health, and want to look your best, then GreenTrim is a must-have supplement in your arsenal!