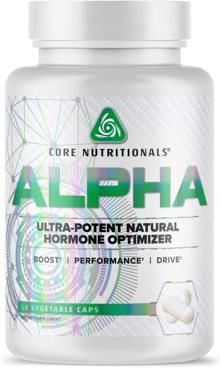 Go to Store
Quick Links to Deal PricesHow does this work and how do stores get listed? See our disclosure below to learn more.
Size
Deal Price
56 Capsules
$43.99
Go to Store
Go to Store
Compare store prices
See all Core Nutritionals Products on PricePlow
Ingredients

Two years ago, Core Test stormed onto the scene and quickly became known as “the best natural hormone support on the market.” Our extensive in house research and multiple blood analysis tests indicated significant rises in testosterone in 8 weeks. Our subjects were extremely amazed at the strength and lean body mass gains, muscle density and hardness, libido boost, and sense of well-being they felt while taking Core Test. Believe it or not, after a year of tweaking the formula, we have come up with an even more potent, all natural hormone balancing supplement designed to optimize lean muscle gains! Core Nutritionals is proud to present to you Core Alpha (Core Test v2)!*

Core Alpha takes the super-effective Core Test formula and makes it even better! In addition to the important ingredients found in the original Core Test and the all new Core Alpha, including 3-desoxy-7-keto-DHEA, Coleus forskohlii, and vitamin D3, Core ALPHA makes five major advances in formulation over the original:*

Testosterone is the ultimate muscle building hormone. You can work out until you drop, but your muscles won’t grow without sufficient levels of this anabolic hormone. So the more circulating “test” you have, the greater the anabolic environment for increasing muscular size and strength. What if you could activate the endogenous mechanisms in your body that increase testosterone production naturally?*

That is where Core Alpha comes in. Core Alpha is an all-natural, innovative product and its ingredient are backed by numerous clinical studies demonstrating promotion of luteinizing hormone (LH), dopamine, and natural testosterone levels along with the support of healthy growth hormone (GH) levels. Core Alpha also includes powerful, all-natural DSHEA compliant anti-aromatase inhibitors, patented herbal extracts, and testosterone assisting agents to support elevated testosterone levels while controlling estrogen, prolactin, and cortisol. As with all Core Nutritional's products, Core Alpha's ingredients are properly dosed and included in a non-proprietary blend formulation so you know exactly what you are supplementing.*

D-aspartic acid (DAA) is an amino acid that is found naturally in several endocrine glands, including the testes and pituitary. While the correlation between DAA and testosterone production has been clinically documented, research indicates several possible mechanisms for these effects. It's likely that DAA acts as a neuromodulator influencing several pathways that govern the reproductive system, particularly testosterone production. Some studies indicate that DAA's concentrated presence in the hypothalamus, pituitary, and testes identify this protein as an up-regulator of gonadotropin-releasing hormone (GnRH), luteinizing hormone (LH), growth hormone (GH), and testosterone. Some studies have found that DAA also stimulates a protein called StAR. StAR is necessary for the cholesterol transport in the cell that is needed for testosterone production. Further, its role in modulating the sexual drive implicates DAA assists nootropic activity, supporting health levels of dopamine and serotonin. Balanced levels of dopamine and serotonin have indicated significant benefits for mood, lean mass, and libido.*

To improve on D-aspartic acid we have instead incorporated N-methyl-D-aspartate (NDMA) into the Core ALPHA formula. DAA is converted into NMDA, which is a potent stimulator of the N-methyl-D-aspartate receptor pathway. By directly stimulating this pathway, NMDA is needed only in small doses unlike DAA’s higher dose requirements. In fact, NMDA elicits its hormone releasing action at concentrations approximately 100-fold lower than DAA. Thus, at a 30 mg dose, NMDA, shows promise to support optimal balance of hormones necessary for lean body mass growth, body fat reduction, healthy sex drive, and over all sense of well-being.*

3D7K is a unique new supplement. Plain 7-keto-DHEA is well-known in the supplement market as a weight management and cortisol balancing product. Core Alpha's compound, 3- desoxy, 7-keto DHEA is a lesser known metabolite of DHEA that is already present in small amounts in the body naturally, and also acts as a cortisol balancing compound (similar to other 7-oxegenated DHEA metabolites). But more importantly, 3D7K is a powerful AI (aromatase inhibitor). The enzyme known as aromatase is responsible for converting testosterone to estrogen in the human body. Furthermore, elevated estrogen can ultimately lead to lower testosterone levels in men (through signaling the hypothalamic pituitary testicular axis (HPTA) to shut down production of GnRH and LH). By binding to aromatase in an irreversible manner (suicide inhibitor), 3D7K effectively supports healthy estrogen levels through aromatase inhibition and also helps promote healthy testosterone levels.*

Because the 3D7K in Core Alpha promotes optimal balance of estrogen and cortisol, it may also allow for healthy testosterone levels from other ingredients in Core Alpha to promote lean mass without the negative side effects of unbalanced estrogen levels. Like NMDA, this would be a potent supplement all by itself, but in combination with the other ingredients it helps make Core Alpha perhaps the most effective natural hormone optimizer on the market.*

Note: 3-desoxy, 7-keto DHEA (8R,9S,10R,13S,14S)-10,13-dimethyl-2,8,9,11,12,14,15,16-octahydro-1H-cyclopenta[a]phenanthrene-7,17-dione) is a completely natural aromatase inhibitor that complies with DSHEA regulations and does not convert to testosterone or any other banned substances (unlike other anti-estrogens pulled from the market in recent years).*

Brassaiopsis glomerulata is a large shrub of the Araliaceae family that occurs in south and southeast Asia. Throughout Asia, this plant is used to treat rheumatism and back pain, aid in digestion, and treat bone fractures. Additionally, some studies report Brassaiopsis glomerulata inhibits carrageenan-induced swelling of rat paws (anti-inflammatory) and also induces an antipyretic (fever reduction) effect using a rat fever model induced by beer yeast or carrageenan. Despite its many medicinal uses, the most interesting aspect of the leaves of Brassaiopsis glomerulata is their ability to reduce the activity of aromatase. Studies show that multiple components of a Brassaiopsis glomerulata leaf extract are capable of aromatase inhibition. The addition of this 10:1 extract in Core Alpha, along with the 3D7K, gives this product a one-two punch at supporting a healthy estrogen balance.*

Mucuna pruriens is one of the popular medicinal plants of India and is known to contain various beneficial nutritional compounds. The main nutrient found in Mucuna pruriens is L-dopa, which acts as a natural source of dopamine. Prolactin is a hormone released by the pituitary gland, which is believed to be the cause for libido and sexual concerns in men. Mucuna pruriens’ ability to support healthy dopamine levels may significantly reduce the release of prolactin hormone by the pituitary glands offering powerful benefits. In addition, clinical evidence suggests that Mucuna pruriens not only supports healthy growth hormone levels but also contains naturally occurring serotonin precursors to support mood, memory, and overall well-being. Clinically shown to support optimal balance of growth hormone, prolactin, serotonin and other beneficial hormones, Mucuna pruriens may also assist healthy blood sugar levels (reduction in stubborn belly fat), weight management, stress support, and overall cholesterol balance.*

Vitamin D3 is an essential hormone precursor that plays a vital role in many metabolic functions, including bone health, blood glucose and insulin management, support for immune and blood pressure health, lean body mass, and weight management (belly fat). Clinical trials have even linked Vitamin D3 with an increase in overall health and well-being. Although some foods contain vitamin D, the human body generates most of its vitamin D needs from the skin through regular exposure to sunlight. Severe vitamin D deficiency is a significant and widespread problem, especially in North America. In addition to its well-known properties for supporting bone density and strength and general inflammatory response, Cholecalciferol is included in Core Alpha because studies have shown that higher levels of vitamin D in men are correlated with higher levels of circulating testosterone.*