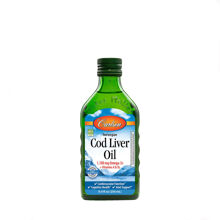 Carlson Norwegian Cod Liver Oil comes in two flavors: lemon and unflavored. The lemon flavor is great if you aren’t a big fan of the smell and taste of fish because it completely masks it. The unflavored fish oil is great for mixing in smoothies, drinks or even when baking to boost the omega-3 content of foods. If you’re tired of trying liquid fish oil supplements that don’t taste very good or lack sufficient EPA and DHA then make the switch to Carlson Norwegian Cod Liver Oil today.

We source the highest quality Arctic cod off the coast of Norway using traditional, sustainable methods. The same day they're caught, our cod are transported to a highly regulated Norwegian facility for processing and purification. Carlson Cod Liver Oil is bottled with a touch of vitamin E and is given a nitrogen flush to remove oxygen and prevent oxidation. Like all Carlson omega-3s, freshness, potency, and purity are guaranteed.

Manufacturer's Directions
Adults: take one teaspoonful daily at mealtime. After initially opening the bottle, keep refrigerated and preferably use within 100 days.